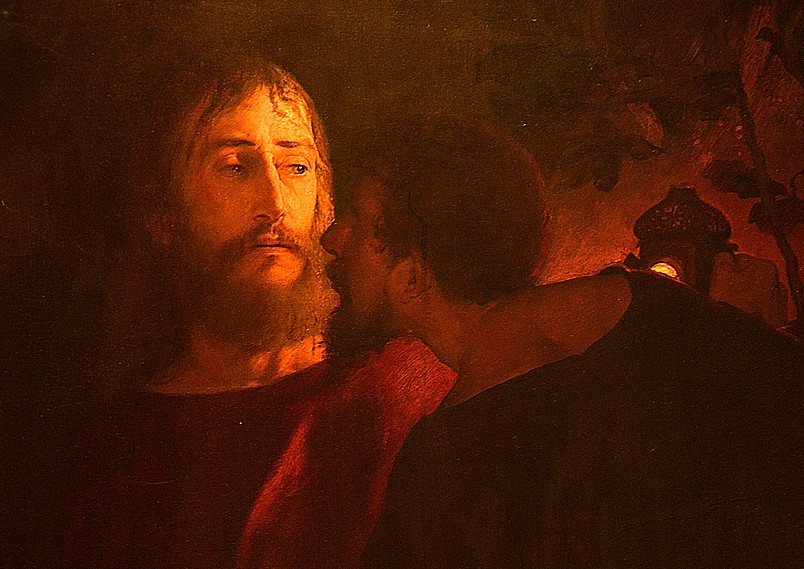 Since Eden,
the serpent in the garden
and occult worm coiled in the fruit's core
have been troublesome.

That day,
his shadow fell across the door,
the man with the softly penetrating gaze.
The warped timbers stood ajar
so that the shrunken laths,
hanging on rust-mottled hinges,
allowed a shard of sunlight
to search out the dust and debris,
long accumulated
for lack of husbandry.

Some kind of god, he was,
strolling the seashore,
more Greek than Jew,
the architecture of his very bones
a numinous amalgam
of meekness and confident authority.
The rugged, bronze-limbed fishermen,
uncouth and ignorant,
were drawn to him as to a magnet-
and he to them -
tax-gatherers and tavern-keepers,
whores and dice-casters in shaded alleys,
women haggling in the marketplace,
ragamuffins playing tag about the stalls,
the myopic Scribe who could not see beyond,
all flocked to hear him, spellbound,
as though he were some Attic orator.
He was the friend of everyone
but the Establishment
whom he confounded.

I wanted anarchy,
a new aristocracy.
I was a Judaean, for heaven's sake,
not a coarse Galilean like the rest of them.
If he really was our Messiah,
I wanted 'in', to be an insider
at this outsider's bolt from the blue,
part of the ensorcellment.
I wanted his bearings, his eloquence,
I wanted to be him!

Later, the day he passed the door,
he caught me in the Temple courtyard,
his anger blazing at wheeler-dealing
in the name of neither God nor Roman.
Oh, he was a glorious firebrand,
tipping over all the tables,
the coins jingling and rolling in pigeon-dung
like Satan's chaotic lottery!
I stood on the sidelines, watching,
neither for nor against such commerce,
and he fixed my eye with his own
and drowned me
in such pain and tenderness
that I was recalled
to our first encounter.
'Will you follow me, Judas?' he asked.
'Will you make up the dozen?'
'Lord, by my calculation that makes thirteen,
but I'm not one to scruple!'
'Then one of us is in error,' he replied.
'But come. Do not tarry longer.'
So I gained an entrée to the tribe,
recalling from his Parables
that dividends were the same for latecomers
as for early uptake.
No stranger to the tally,
my acumen was primed
to keep the privy purse.
A 'good steward', I'd heard him say.
The New Kingdom
could have no foundation
on poor investment of talents.

There was no doubting
his charisma, his way with words,
the pacific aura that seemed at times
to hold the corners of the universe.
They said he could command the elements -
such marvels and miracles!
But what was that to me?
My debts
weighed in the balance
just the same.
Ask, Seek, Knock, he said.
It made no difference.
I saw the evidence of change in others
but the door opened not to me.

He mirrored
what I should become
and mocked
by the comparison.

It came to a head when we dined at Bethany
where he'd exorcised the death of Lazarus.
Mary, a scandalous woman,
made an extravagant show of thanking him.
They were paupers, that family.
How came she by the jar of spikenard
she broke so wantonly over his feet,
filling the house with the stink of it?
(Let's assume it was purely gifted to her.)
Weeping, she soothed in the fine emollient
with wild, dark rivulets of hair.
It stuck in my craw to watch.

Surely, if he had been God's son,
he would have known
what manner of female she was.
'If her soul be true,' I said,
'shouldn't she have sold this flask
and given the proceeds to the poor?'

The nudge did not move him.
Within the pulled shadows of the oil-lamp,
he made some mystic comment
about her motive and the day of his burial.
It seemed he knew he was done for.
The Sanhedrin had him down for a blasphemer
and needed only a cue to arrest him
under cover of darkness
My heart sank.
For all his gut-churning appeal,
I'd backed another loser in the game of life.
He was a genius of sorts,
the Kingdom a mere projection of himself,
a good fantasy; inspiring, harmless.
It had no teeth
and would vanish like vapour at dawn.
Messiah? The notion kindled a burning pathos.
We were all in the grip of it,
sold down the river.
How I wished it could have been otherwise!

From there it was downhill,
from bad to worse.
I felt in my marrow the enemy closing in.
If he were captured,
how should we be free?
Safer to side with the Establishment now!
Perhaps he deserved the benefit of the doubt,
but I had neither the fibre nor will.
He knew that one of us
was drawing falsely on his account.
We reached to dip our bread together in the dish
and he looked me in the eye as he'd done
that first day, with piercing sorrow
and a strange vibrant resolution
that crystallised mine.
'Do what you have to do,' he said,
'and do it quickly.'
I felt a great fish turn tail in the waters within.
He was giving me permission to be myself!
Whether traitor or patriot, I knew not,
only that his moonshine wasn't for me.
Without a glance at the others, I left
and reported to Caiaphas that, by and by,
the wanted man should be found in the Garden.
My kiss would distinguish him.
My farewell kiss.
Listener, I kissed him into Eternity!
I did that!

Thirty silver shekels they gave me,
the sum due to his master for a slave
accidentally slain.
And now I know, I know the truth
and it is too late, too late...
I grope the black abyss
and my innards are in torsion,
biting the purchased dust. 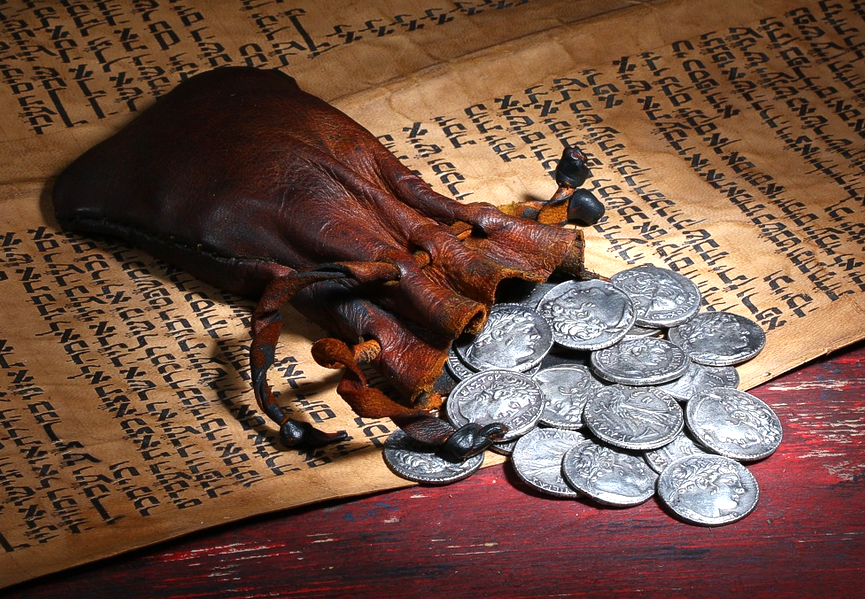 Poem from JERICHO ROSE, Songs from the Wilderness (poetry collection in preparation).