As a small child, I lived in a poky cottage opposite a tall red brick wall which formed the curtilage of Georgian rectory, a classical house of pale stone, abandoned and fallen into ruin. The bricks glowed fire-red at sunset and, though pitted here and there, had a sheen you never see in modern buildings. Years of unlit hearths had saplings sprouting from the chimney-pots, as though from the noses of trolls in Norwegian fairy tales. Tattered rooks swooped about them, their cawing a coarse counterpoint to the lazy cooing of pigeons from the nearby woods.

The back and front yards, I was sure, were made of peanut brittle; some kind of pebble-embedded concrete. The back garden was narrow, but long and open to the sky. It was raised above most of the village and looked out upon blue slate, pantile and thatched roofs, all higgledy-piggledy, beyond a walnut orchard. “Your wife, your dog and your walnut tree, the more you beat them the better they be,”maintained the owner, whose name I forget. He looked as though he would not have spared the rod on vociferous children. He wore a brown overall, the same colour as the paper bags shops used, and a battered felt hat, not unlike a Quaker's. I've written elsewhere how WWI and WWII set us back decades and the tenor of life in the country still belonged in the Edwardian era, albeit the effects of the Great Exhibition of 1951 were slowly ushering in a new style of living. Children were seen and not heard in company, unless addressed. But, oh, how much you learned from listening and taking stock! Books and the radio were our main indoor entertainment and we didn't think  ourselves deprived. More to the point, we still don't. 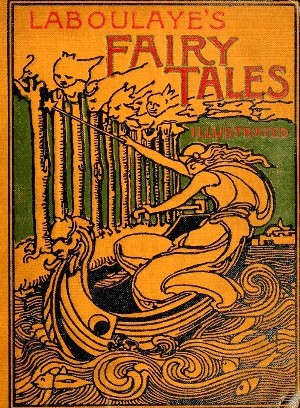 The cottage was one in a row of four which flanked a stony hill up to the church where children preferred not to linger but delighted in spinning scary yarns about the gravestones and the haunted vicarage. These were fuelled by the Brothers Grimm and Laboulaye's Fairy Tales. The churchyard path was a short cut to a back lane where the farm was situated which delivered our milk. They ladled it into our cans at the gate from a galvanized churn. On one occasion, when the delivery was late, I went with my Dad to the farm and on the way back through the churchyard meadow, he much impressed me by swinging the can in a circle over his head without spilling any milk. He worked in civil engineering and explained that this was something called centrifugal force. I had no idea what it meant. It seemed like a miracle. So, the far-fetched was a part of who we were.

One day, he and I stood on the back doorstep. You could see several miles distance, the horizon clearly showing a buff-gold peak. We lived near the Swithland slate quarries and not far from the Mountsorrel sand and gravel pits. My Dad pointed to the distance: “You see the mountain over there? You were born on the other side of that.” I had visions of being forsaken  naked on a heap of abrasive scree by angels instead of under a gooseberry bush, but it seemed evidence of a realm of wonder out there, where I might one day belong. The mountain is long gone now, dispersed in the building of motorways which radiate like wheel-spokes from the heart of the Midlands. 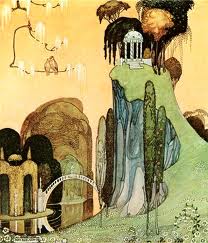 The vegetable patch at the far end of our garden seemed nothing but a white butterfly nursery and was approached by a mossy path, on one side apple, pear and damson trees, on the other, a clump of soft fruit bushes. I remember being fascinated by the veined peridot of whiskery gooseberries against the light, the redcurrants like bubbles of ruby and blackcurrants like Pooh Bear's eyes. I remember the drone of wasps sinking mandibles into the overripe plums and the thrushes dizzy with fermenting juice in the autumn. The birds loved our yew berries, too, which made the slate steps into the lane purple-stained and slippery with their viscous golden seeds popping from the red flesh like pimento-stuffed olives. The intricate, somehow prehistoric, design of a bright green grasshopper was fascinating when it landed on your arm. One of the earliest poems I learned to chant was by Ada Skinner from one of her books of Children's Verse, now revived by the Baldwin Project:

Grasshopper Green is a comical chap;

He lives on the best of fare.

These are his summer wear.

Out in the meadow he loves to go,

Playing away in the sun;

Summer's the time for fun. 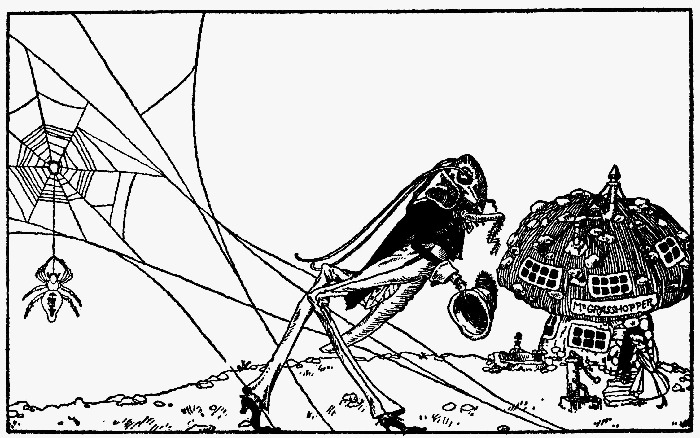 When I knee-high to aforesaid grasshopper, Dad would read from Charles Kingsley's The Water Babies. Despite the illustrations being mostly only pen and ink, they were evocative of an underwater world and of the strange characteristic striated rock of the North Devon coast from where the author and many of our ancestors hailed.

My world was in miniature, a lot more so than a child's world today. But my destiny beckoned and I never doubted that there was a road out to the wide blue yonder. The children's literature of the day inspired an expectation of it. After all, a repeated phrase (usually referring to a man, it is true) was 'and set out to seek his fortune'. Even then, I grasped that fortune did not necessarily equate with money. There was a unique way of being to be discovered that would enlarge each of us and enrich the world, albeit in a modest way. 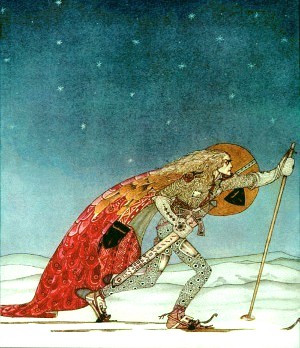 Laboulaye's Fairy Tales (Of All Nations) whose illustrator was Arthur A Dixon, was spell-binding. If any should doubt that the timeless narrative tale is a lost art, take a look between these pages if you get a chance. Among those I liked best was The Twelve Months. It was the story of two sisters, Katinka and Dobrunka. Katinka determined upon a life of luxury and made demands upon her longsuffering sister to obtain from the twelve months, who manifest in human form, all her whims and wants. In the end, the hardworking Dobrunka gained happiness at the expense of her lazy sibling. It was a Russian tale. There was no notion of 'politically correct' in those days. Most stories were what we would now regard as propagandist, though it was sound enough everyday morality. 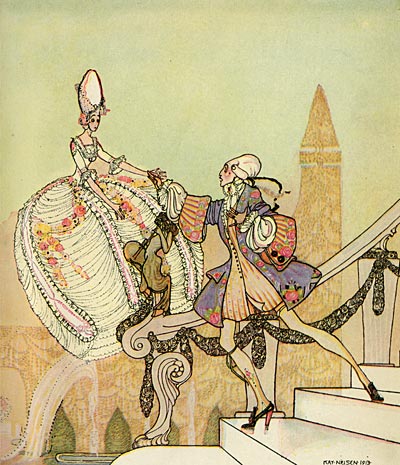 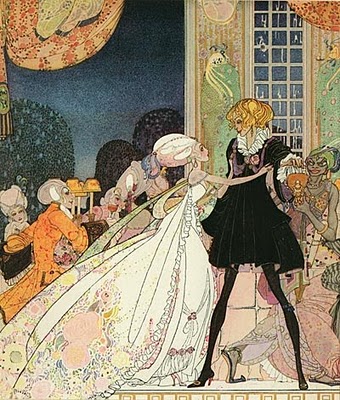 Other favourites were Cinderella, The Sleeping Beauty, The Magic Tinder Box, Rapunzel and Hansel and Gretel. But, perhaps, the best-loved was Hans Andersen's The Ugly Duckling and I would get my Dad to read it over and over again. It made me cry and filled me with hope all at the same time. Justice was served and there was evidence of order and balance in the cosmos. 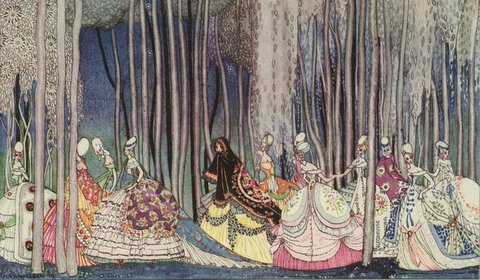 These books had the most wonderfully atmospheric drawings and I particularly loved the mythical world translated by the Art Nouveau era. I might mention Arthur Ransome, Kate Greenaway and Mabel Lucie Attwell as original illustrators, but my supreme favourite has to be the Danish artist, Kay Nielsen, whose images reign on this page. His artwork appeared in books of collected fables from a diverse range of cultures. One such is the volume of Norwegian folk tales entitled East of the Sun and West of the Moon, published by Hodder & Stoughton in 1914 and revived in 1976. Nielsen's oeuvre is full of strange attenuated lines consistent with tall stories, and beguiling curlicues. The grotesque becomes pantomime and the masque a venue for hinting at clandestine truth. His fabulous dreamscape world describes what we cannot articulate in words and resonates deep in the psyche. It is an enchanted dominion where Good and Evil draw swords. It is tinctured with pain and resolution, warning and bliss, and fosters the Hope that is a prelude to renaissance. 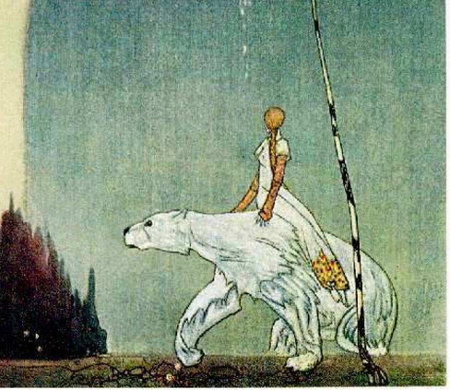 Maybe, I have Viking ancestors. My Dad always said so. And the chances in these Isles are somewhat above odds on! 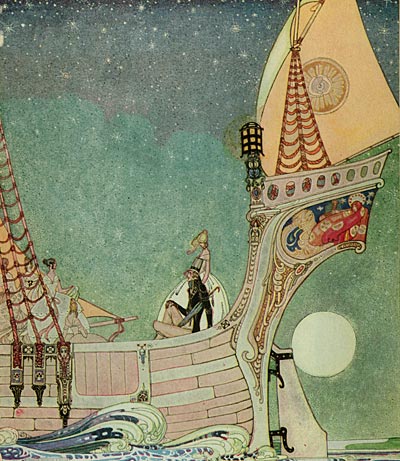